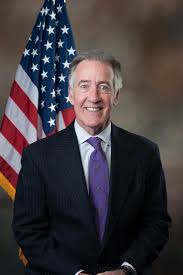 Congressman Richard Neal of Massachusetts delivered this week’s Democratic Weekly Address and was Tuesday’s KVML “Newsmaker of the Day”. Here are the unedited words:

In the coming weeks, the House of Representatives will begin a conversation about reforming our nation’s tax code, which hasn’t been overhauled in more than 30 years.

Both Democrats and Republicans agree that something must be done to simplify our tax system. Our current tax code is far too complex, riddled with unnecessary loopholes that allow some to avoid paying their fair share, and unfair to American businesses trying to compete in an increasingly globalized economy. While both Democrats and Republicans agree that tax reform is needed, we have very different views about what our tax system should look like.

Two weeks ago, Republican leaders and President Trump released a tax framework that they say is the starting point for their forthcoming tax reform proposal. While there are a few ideas that Democrats might be able to support, we believe that the Republican tax cut framework failed to live up to the test that President Trump himself set for his tax plan when he said it would be focused on the middle class.

Democrats believe that the Republican tax plan is simply unfair, and would further rig the tax code for the rich.

Under the Republican plan, tax revenues from individuals would RISE by over $2 trillion dollars, while revenue from corporations would DROP by over $6 trillion dollars – this means more of the tax burden will be shifted from big corporations to working families. Asking the American people to foot the bill for trillions in tax cuts for big corporations is wrong. Democrats are looking for a tax plan that begins and ends with middle class families.

Finally, the Republican plan would not be good for our economy. Under their proposal, trillions of dollars would be added to the deficit just to give tax cuts to those at the very top. In 2001 and 2003, Congress passed trillions of dollars in unpaid-for tax cuts that disproportionally benefitted the richest families in this country. President Bush told the American people those tax cuts for the rich would pay for themselves. That didn’t happen. Our economy became saddled with trillions of dollars in debt that dragged down economic growth and job creation.

Democrats believe that there’s a better way. We believe that the American people deserve a tax code founded on fairness – one that rewards hard-working, middle class families, small businesses and innovators, while ensuring that no one, no matter how well-connected or wealthy they are, can avoid paying their fair share.

We believe America is long overdue for real tax reform that provides help to middle class families, and those aspiring to reach the middle class. This means a tax code that creates jobs, boosts wages, and gives hard-working families the tax cut that will help them get ahead.

From the beginning we have told our Republican colleagues we were ready to sit down and discuss ways to build a pro-growth tax code that was ‘middle out’ – one that rewarded hard work and helped families get ahead. That isn’t the path our Republican friends have taken, but it’s not too late. Democrats believe we can do better than a plan that provides 80 percent of the tax cuts to the top 1 percent and sticks our grandchildren with trillions in debt. That’s not a middle class plan and we’re ready to work with Republicans to build one that is.”