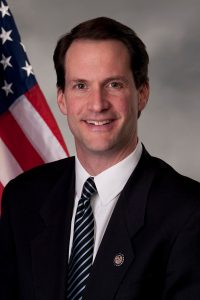 Himes was Tuesday’s KVML “Newsmaker of the Day”. Here is the transcript:

Hi, I’m Congressman Jim Himes. I represent southwestern Connecticut and have the privilege of chairing the New Democrat Coalition, a group of 61 forward-thinking pro-opportunity Democrats.

Walking around my district in southwestern Connecticut, you can’t miss the sharp economic challenge that we face today. In places, weeds and windblown concrete have replaced factories that used to make everything from clothing to the weapons that won two World Wars.

My grandpa Andrew spent his life working for Eastman Kodak, a company that brought magic into homes around the world. At its peak, Kodak employed almost 150,000 people. Five years ago, Eastman Kodak went bankrupt.

Fortunately, my district is also home to iconic innovators like Pitney Bowes and NBC Sports, and to growing newcomers like Datto, Synchrony and Indeed.com, which didn’t even exist 15 years ago. Restaurants and thriving retailers now occupy former barren lots in Bridgeport, Connecticut, because you cannot keep American innovation down.

But without planning and support, too many people get left behind.

When factories close, good people lose more than their paychecks. Dignity, worth and a sense of belonging also seep away. Pride and community turn to fear and division.

President Trump trades in that decline: He nurtures fear, paints a dark picture of the future, blames immigrants, Muslims, Democrats and the media. He promises walls and he promotes division.

And he delivers nothing. Not jobs. Not opportunity. Not unity.

We Americans are decent, neighborly, self-reliant people. We’re not looking for saviors or for handouts. We’re looking for opportunity. And we know exactly where it comes from.

In a changing world, Americans need to be better educated and skilled than people anywhere else.

That’s certainly my story. Whatever successes I’ve had ties straight back to strong public schools and teachers who cared. The Democrats’ A Better Deal demands no less for every single American child.

It’s time to make sure that our businesses offer apprenticeship programs to teach valuable skills. We must invest in lifelong learning, training and education, so that every worker, young or old, can be vital and relevant to the industries of tomorrow.

That’s why Democrats are offering the American people A Better Deal: better jobs, better wages and a better future. A Better Deal recognizes that the core of our economic success has always been hard-working Americans, growing businesses, and the sturdy playing field on which they compete: the highways, airports and railways that undergird American prosperity.

Since George Washington’s investment in the Chesapeake and Ohio Canal, businesses have always depending on a reliable foundation of communications, transportation and power.

We are descendants of people who spanned a continent with rails of steel, took to the skies, and crossed the black void of space to land men on the moon. We owe it to those generations to be better stewards of their legacy.

When did it become OK for our America to have second-class roads, airports, harbors and rails?

We know there’s hard work and tough choices ahead. But we also know from experiences that investments in education and training, in transportation, communication and power will pay for themselves many times over.

So why aren’t we coming together to make it happen?

Today, we’re distracted by the Tweeter-in-Chief, who deepens our divisions, sows seeds of discord and fans the flames of violence.

Our country needs and deserves leaders who will encourage us to be our better selves and who will champion the ideas that we know are good for our nation. These are the ideas that animate A Better Deal for families across America.

Democrats are all about opportunity, growth, innovation and the good jobs that follow. We will not be distracted. We will not be deterred. Because we understand something that President Trump never will: that our world can be a far, far better place – and that together we can make it so.