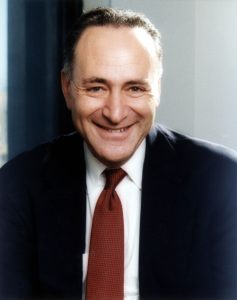 Schumer was Tuesday’s KVML “Newsmaker of the Day”. Here are his words:

“Our country took part in a tradition that is a cornerstone of our democratic system of government, the peaceful and orderly transfer of power. The ceremony also offered Americans a chance to hear their new President articulate his vision for the country.

Today, in a conversation with you, the American people, I want to share the Democratic Party’s vision, and how we will work to advance it in this New Year and the new Congress.

First, we are going to recommit ourselves to a set of principles that have always been at the core of our party, what my friend Senator Ted Kennedy called “economic justice.” Sticking up for working families; economic fairness for the American worker; opportunity and prosperity for the middle class and those trying to reach it.

Those principles will be our North Star. We will follow them; we will fight for them. And, Second, we shall fulfill our solemn Constitutional duty to hold the other branches of our government accountable. It is not our job to be a rubber stamp. It is our job to do what’s best for the American people. That’s why we were elected.

So to the extent that the President and Republicans in Congress pursue policies that help Americans and are consistent with our values – on issues like infrastructure, trade, and closing the carried interest loophole, for instance – we stand ready and willing to work with them.

But if they propose policies that will hurt Americans, cut their Medicare, or Medicaid, or Social Security; if they roll back consumer protections or our laws that keep Wall Street in check…

If they want to wind back protections for clean air and clean water… Then Democrats are going to fight them tooth and nail. When they try to rush through a Cabinet full of billionaires and bankers without proper vetting…When they try to rip affordable health care away from tens of millions of Americans and have no plan to help these folks…Then Democrats will fight them with every fiber of our being — as we’re doing right now. And what we will always do is hold the President accountable.

And perhaps most importantly, accountable to the law. Democrats will make this year’s Congress an “Accountability Congress.” The President ran against the establishment of both parties. He promised to change the way America operates: to oppose elites, drain the swamp, and pay attention to working families.

But since the election, he seems to have forgotten that. His cabinet is stacked with billionaires, corporate executives, titans of Wall Street, and those deeply embedded in Washington’s corridors of power. Too many support the same, hard-right, doctrinaire positions that many in the Republican Party have held for years – policies that the American people have repeatedly rejected.

We are already working to hold him accountable for that. We Democrats can’t control what the President or Republicans in Congress do. We can only control what we do.

And what we’re going to do is keep the faith; hold true to our values and our principles and fight for them…and always, always, hold the President and his party accountable.

It is an immense responsibility, but we will meet it with energy and passion — and a commitment to continue having a conversation with you, the American people, every step of the way.”