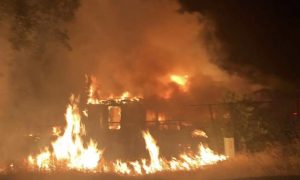 The fire was reported at around 3am. The initial responders saw heavy smoke coming from the dwelling and it was also spreading to nearby vegetation. Officials were able to stop the spread quickly. The home was unoccupied. The Calaveras Consolidated Fire Protection District is investigating the cause of the incident. Officials from CAL Fire and San Andreas Fire also assisted in putting out the fire this morning.