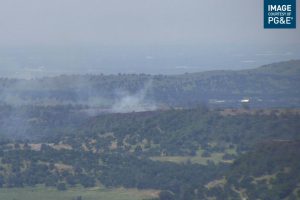 Update at 12:15 p.m.: CAL Fire dispatch reports that fire crews have made short work of a vegetation fire burning near Yosemite Junction in Tuolumne County.

The flames broke out just before noon in some brush along Highway 108 near the Highway 120 turnoff in the Chinese Camp area. Crews have managed to stop the forward rate of spread at a quarter acre in just about 15 minutes on scene. A small crew will work towards full containment while mopping up for the next couple of hours.

CAL Fire reports the flames broke out in some brush along Highway 108 near the Highway 120 turnoff in the Chinese Camp area. There is no word on the fire’s size, the flames’ rate of spread, or whether any structures are threatened. An update will be provided as soon as new information comes into the newsroom.