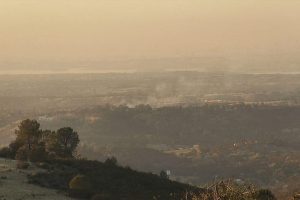 Update at 4:55 p.m.: CAL Fire dispatch reports that all aircraft have been released from the scene as a vegetation fire in the Burson area of Calaveras County has been extinguished.

The fire ignited in some grass in the 3900 block of Meadow Oaks Drive near Los Coyotes Lane, between Highways 12 and 26 around 4:15 p.m. on Friday. CAL Fire reports that it was contained at a half-acre in about 20 minutes. No structures were threatened. A small engine crew will remain on scene for the next hour mopping up. What sparked the fire remains under investigation.

The flames broke out in the 3900 block of Meadow Oaks Drive near Los Coyotes Lane, between Highways 12 and 26. CAL Fire dispatch reports it is a half-acre in size and moving at a slow rate of spread that is heading from grass into some brush. Currently, no structures are threatened. An update will be provided as soon as more information comes into the newsroom.