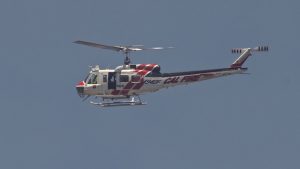 Update at 6:10 p.m.: CAL Fire reports that a grass fire that was burning in the Bear Valley area of Mariposa County has been contained at 5 acres. Columbia aircraft are headed back to base. One engine from Tuolumne-Calaveras Unit (TCU) of CAL Fire has also been called off the scene.

Original post at 545 p.m.: Mariposa, CA —  Columbia aircraft and one engine from the Tuolumne-Calaveras Unit (TCU) of CAL Fire are assisting in battling a vegetation fire in Mariposa County.

CAL Fire reports that the fire is 3 to 5 acres in size and moving at a moderate rate of spread. The flames broke out in some grass on Hunters Valley Road near Bear Valley Road, west of Highway 49, in the Bear Valley area. No structures are threatened. An update will be provided as soon as new details come into the newsroom.